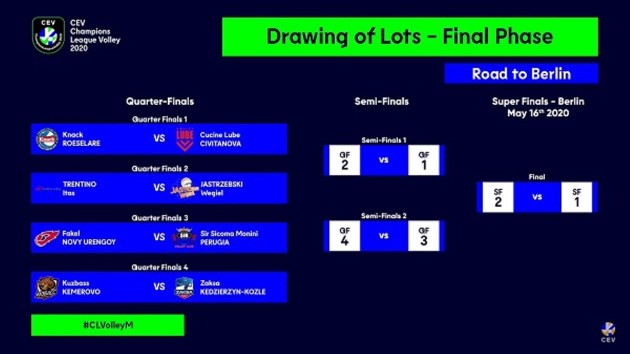 Eight teams eagerly waited to see their rivals in the quarterfinals of the Champions League, which will be played without the most titled club in the competition Zenit Kazan who sensationally got stuck in the pool stage for the first time ever.

As it was known from earlier, Super Finals is scheduled for May 16, at the Max-Schmeling-Halle in Berlin, Germany. Unfortunately for the fans in the German capital, their team Berlin Recycling Volleys failed to advance to the Playoffs and thus, won’t be able to have a chance to play in front of their own fans in the eventual final match.

Interestingly, although three Italian teams (most from one country) have qualified for the quarterfinals, there will be no mutual encounters between them. The Playoffs are set to be played on March 3-5 (first leg) and one week later (second leg).