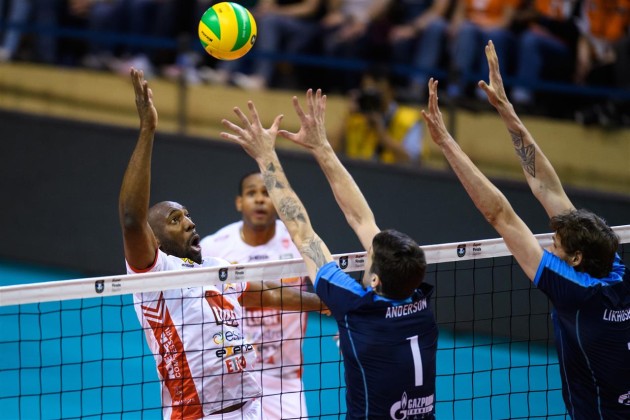 Lube did not make the same mistake from the last season when they had 2-1 against Zenit and allowed Zenit to make a comeback and win the CEV Champions League crown. This year, in the Super Final that was held in front of the packed stands in the Max-Schmeling-Halle in Berlin (9,200 spectators), Lube converted a 2-1 into winning the European title after 17 years, the second in the club history. Thus, they lifted two major trophies in only five days – the Italian Championship and Champions League! As for Zenit, they were firstly dethroned in Russia after five years and now in the most elite club competition in Europe after four years.

The things did not start well for Lube today as Zenit ran them over in the opening set – 25-16.

Lube came back in style, making a 7-1 run in the second set (from 3-4 to 10-5) and extended it to a 9-2 run (12-6). Bruno – Simón first tempo worked perfectly for Lube whose players served on Earvin Ngapeth, completely neutralizing him in the attack which resulted in several kill blocks on the Frenchman – 25-15.

The third set was a fairytale for Lube who made a 10-2 run (from 4-4 to 14-6) by using the same recipe – serving on Ngapeth and reading Zenit’s attacks very well, making a kill block after kill block. The head coach of the Kazan team Vladimir Alekno switched places to Maksim Mikhaylov and Matthew Anderson, trying to give a new dimension to the attack of his team but it was in vain. Yoandy Leal was unstoppable, making 8 points in the set. On the other hand, Zenit players made only 5 points by themselves during the entire third set – 25-12!

The fact that Zenit served their first ace in the match at 1-2 in the fourth set shows how much they were in a subordinate position in the final. Lube made an 8-2 run (from 8-6 to 16-8), confidently marching towards the title. But, at 23-12, Ngapeth stepped on a service line and ruined Lube’s reception. Thanks to his powerful serves who directly and indirectly helped Zenit make a 7-0 run, coming only four points behind Lube (19-23)! But Leal interrupted this run with a spike and Tsvetan Sokolov closed the match in the next point – 25-19.

#SuperFinalsBerlin: MVP awards go into hands of Egonu and Juantorena

What a strange game. Zenit destroyed Lube in the 1st set so I thought it will be ease 3:0 win for Zenit. Then like they changed jerseys. Zenit was nowhere to be found and Lube was destroying them the same way they were destroyed in the 1st set.
Zenit has to do serious reshuffling of the squad, this season was a disaster for them, they didn’t win anything.

Who was this CEV English commentator and what has been his experience with volleyball before? How are selected and prepared by CEV the commentators on such event? What were the criteria for selection of the commentator? Who was responsible for his selection and who had approved him?