ITA M: Sander to get more space vs. Latina; Djuric still out; derby in Modena!

Trentino and Castellan have opened the fourth round of the Italian Serie A1 last night and here are the review of other matches. 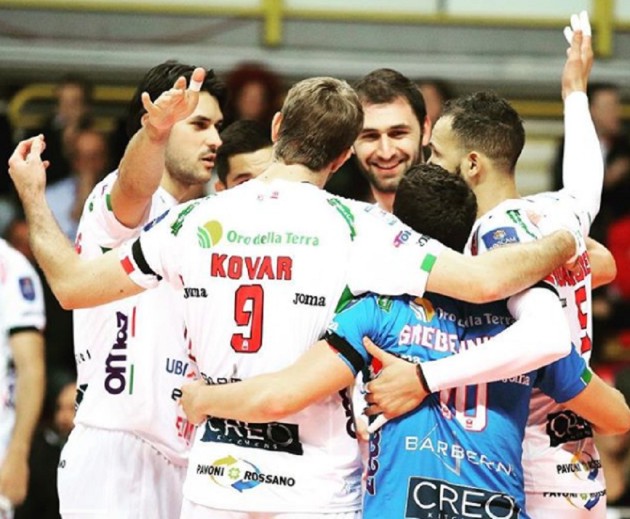 It’s going to be the 48th clash of these two teams in Serie A1. The head coach of Latina Vincenco de Pinto will probably start with these players: Sottile-Starovic, Rossi-LeGoff, Maroutti-Savani; libero Shoji.

Gianpaolo Medei will make some changes for the clash against Latina. There will be more space for Sander in this game: Christenson-Sokolov, Sander-Juantorena, Stankovic-Cester, libero Grebennikov. Lube have not lost a game to Latina since 2012.

The head coach of Verona Nikola Grbic is still waiting for Mitar Djuric’s recovery and he has to find again a solution at the position of the opposite. The expected line-up: Spirito-Stern, Maar-Jaeschke, Birarelli-Pajenk. Pesaresi libero.

In the last 18 meetings between these two teams, Padova won six. They will try to improve the score against Verona with these players in the starting line-up: Travica-Nelli, Cirovic-Randazzo, Volpato-Pollo; libero Balaso. The only player that won’t play for Padova is Bassanello.

Modena want to continue the winning streak in the Italian Serie A1. The expected line-up is: Rezende-Sabbi, Ngapeth-Urnaut, Mazzone-Holt; libero Rossini.

There are some good news for Piacenza’s fans. Gabriele di Martino is registered to play and he will travel with the team, while Alessandro Fei has resumed practicing and he is still in doubt for the game against Modena. Two players are out: Leo Marshall (shoulder injury) and Ivan Kody (African Championship). The expected line-up: Baranovicz-Hershko, Alletti-Yosifov, Clevenot-Alletti; libero Mania.

Vibo Valentia is going to try to end the winning streak of Monza in head to head matches. Last time, Vibo took the win in 2011 and since that game, Monza have won 5 games in Serie A1. Two players, Rocco Barone and Simone Buti will now face the former team in the colors of Monza…Starting line-up of Vibo: Coscione-Patch, Costa-Verhees, Antonov-Leca; libero: Marra.

Even though we mentioned Barone above, it seems he won’t be able to play due to some problem with his eye.

“It’s important to win three points here. We play at home against direct competitor and we will have to focus on our game so we can come out as the winners,”says head coach Falasca, who will probably attack the rival with these players: Shoji-Hirsch, Buti-Beretta, Botto-Dzavoronok; libero Rizzo.

There is one interesting information about these two teams – Sora has never defeated Ravenna in Serie A1. Ravenna have six wins…

Lube would have 5 foreigners. lol
Grebennikov or Stankovic will be offloaded so Sander can play. All those people will only play complete during the World Club Championship or Champions League. In the Italian League… It is not possible.

ITA M: Plot to the rescue