Thailand is counting seconds ahead of the 2013 FIVB Girls Youth World Championship due to start on Friday July 26th and continue until August 4 in two venues at Nakhon Ratchasima with all the preparations coming to close before the opening ceremony. 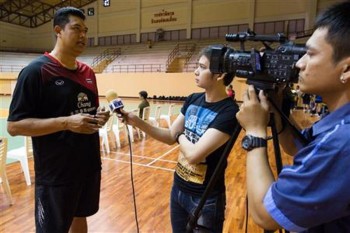 The competition which is the first to be held with 20 teams like the entire age category World Championship will be organised in two neighbouring halls; Chartchai Hall with the capacity of 5000 spectators hosting pool A and C and Lipatapanlop Hall (2000) for Pool B and C.

More than 200 volunteers are working for the final installations of the courts and all other accessories waiting for the take-off.

Host team Thailand played a friendly match against favourites Poland in the final touch of their preparations.

“We are looking forwards to have a successful competition either at the organisational level or the outcome of our team in front of our crowd,” Said Thailand coach Kongsawat Apichat.

Four out of the six previous winning countries are available here in Nakhon Ratchasima led by the record holders Brazil and China (3 crowns each), Japan (two titles) and Turkey (1), while the only absentees from the winners are Russia and Korea.