WGCHC W: “We made too many mistakes” – stated Brazil captain Fabiana

Brazil captain Fabiana Claudino admitted her side made too many errors. 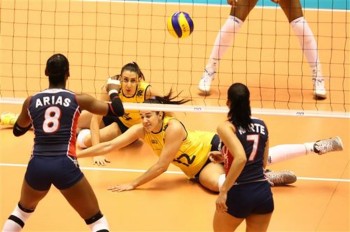 Brazil captain Fabiana Claudino: We won but we made too many mistakes today that we shouldn’t be making. I think it was important to recover very quickly and at the end of the match we were serving well and defending well.

Brazil coach Jose Roberto Guimaraes: The match was really tough and I think one of the reasons for that is that our playing styles are very similar. I’m happy about winning 3-1 but now I have to start preparing for the next match.

Dominican Republic coach Marcos Kwiek: We made too many mistakes and against a team like Brazil that is catastrophic. Brazil’s blocks were very good. We improved in the last two sets, but it was too late.

Dominican Republic captain Bethania De La Cruz: Brazil are always a strong team and always difficult to play against. At the start of the match we lacked concentration, but once we got our game together we were able to take a set. The main cause of our loss was our inability to score on counterattacks.