Legendary coach Eugenio George Laffita, who led the Cuba Women’s Volleyball Team to three consecutive gold medals at the Olympic Games, among a collection of titles, was honored with the NORCECA Golden Collar Order on Thursday. 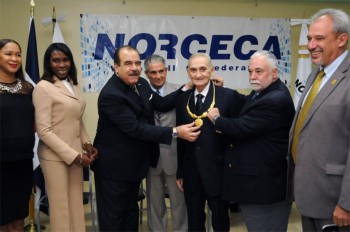 George Laffita, who turns 81 in March and in 2000 was selected by an FIVB Grand Jury as Best Women’s Team Volleyball Coach of the Twentieth Century, received the recognition during a ceremony held at NORCECA Confederation headquarters following the conclusion of the annual meetings of the Sport Organizing Commission.

The decoration was presented by Cristobal Marte Hoffiz, NORCECA President and FIVB First Executive Vice President, accompanied by several members of the Executive Committee and Board of Administration who also took part in the meetings.

A visibly emotional George Laffita expressed his gratitude on receiving the order.

“I receive this honor with humble and I am glad it has been presented by someone like Cristobal who has done so much to raise the NORCECA,” said George Laffita.