Azerbaijan’s capital city, Baku, is well ready to play host to the final four of the 2012 CEV Volleyball Champions League – Women that is set to take place this weekend and whose venue will be the magnificent “Heydar Aliyev” Sports and Concert Complex (picture), the largest sports hall in the country. 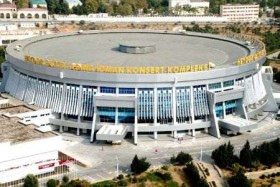 Baku is ready to play host to women’s final four

Unfortunately for the many local Volleyball fans the two teams representing Azerbaijan in the competition, Rabita and Azerrail, did not advance to the final stage of Europe’s most elitist league. Rabita BAKU, winner of the 2011 FIVB Club World Championship this past October in Doha, did not claim any single set out of two 1/4 final matches with Turkey’s Fenerbahce Universal ISTANBUL, while Azerrail could not complete a great comeback after suffering an away defeat in Russia, losing the deciding “golden set” to Dinamo KAZAN.

However, the hall shall be fully packed as some of the world’s best Volleyball players will be in action in Baku. Azerbaijan did already play host to major Volleyball competitions in the past, and namely to the final four of the Top Teams Cup in 2002 and of the CEV Cup in 2010, as well as to the European Qualification Tournament for the 2004 Olympics.

In the semifinals scheduled for Saturday Fenerbahce, runner-ups in 2010 and bronze medalists from the past season, will challenge Dinamo KAZAN, while RC CANNES – the only side so far able to seize the trophy, and this happened twice in 2002 and 2003 – will extend its rivalry with Italy’s sensation MC-Carnaghi VILLA CORTESE after edging already twice in the prelims the group coming from the outskirts of Milan.

The final four has drawn the attention of many media with some 60 requests – also from abroad – having been dropped to the organizers. All journalists are kindly invited to the press conference with the coaches of the four participating teams which is scheduled for Friday, March 23, right upon completion of the Technical Meeting taking place at “Grand Hotel Europe”. All media passes will be available at “Heydar Aliyev” Sports and Concert Complex already on Thursday and Friday. In the meantime France’s embassy in Baku has invited all French nationals living in Azerbaijan to come to the sports hall and support RC CANNES as the ladies from the Riviera embark on their quest for European glory.

As it was already the case this past weekend with the men’s finals in Lodz, a live gallery of the competition will be provided throughout the weekend and available here

The final four will be broadcast – live or delayed – in a total of 101 countries and territories; a detailed TV schedule is available here (see Downloads box) while live streaming, with English commentary, will be provided as usual by LAOLA1.tv

Special flavor will be contributed by the fact that the final four will run in combination with “Novruz”, Azerbaijan’s New Year festivities and all corresponding celebrations.