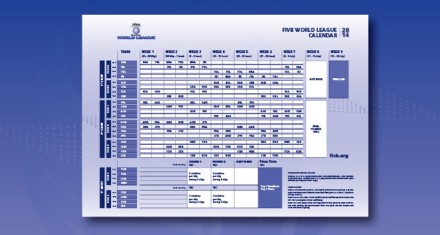 The 2014 FIVB World League section will provide all the latest news and information in the lead-up to the tournament as well as match results and analysis during the Intercontinental Round and Final matches. Background information on the teams and personalities involved in addition to photos from every match will also be included here.

And to help keep on top of the action each week, a dynamic calendar of the Intercontinental Round matches can now be downloaded.

Nine time World League winners Brazil will begin their bid for this year’s World League title on the first weekend of pool play when they take on last year’s bronze medallists, Italy. Olympic champions and defending World League title holder Russia will take on Serbia in their first away match of the tournament in the second weekend of the Intercontinental Round.

The FIVB’s premier annual men’s volleyball event will expand from 18 countries to 28 for the first time ever this year.

To read more articles about this competition click on World League 2013.

Balancing the lifestyle of a professional athlete...