Knack ROESELARE – one of three teams that are set to represent Belgium in the 2015 CEV DenizBank Volleyball Champions League – proudly announced on Tuesday that the contract with their home star and team captain Hendrik Tuerlinckx (see picture) that was due to come to an end after the 2014/2015 season has been extended up to 2016. 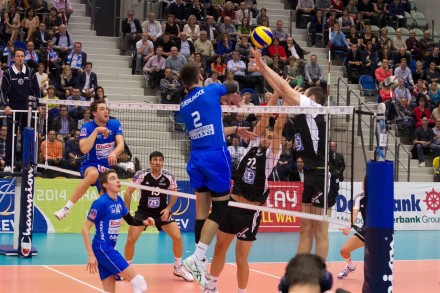 After spending one year in Italy with PERUGIA Volley, Tuerlinckx returned back to Belgium in 2008 and has been playing for Knack ROESELARE ever since, winning three titles in the national league, two in the national cup and another two in the Supercup.

Tuerlinckx has been voted Belgium’s Volleyball Player of the Year in 2013 and 2014. At the end of the last season in the Ethias Volleyball league he was chosen – by a panel of coaches – as MVP for the second consecutive year. Hendrik performed strong also in the 2014 CEV DenizBank Volleyball Champions League where he anchored Knack ROESELARE to six consecutive wins in the prelims scoring an average of 5.37 points/set. Tuerlinckx is very much looking forward to his future alongside Knack ROESELARE, and left on his Facebook page the following message: “The best is yet to come.”

Volleyball evolution – this is how service...