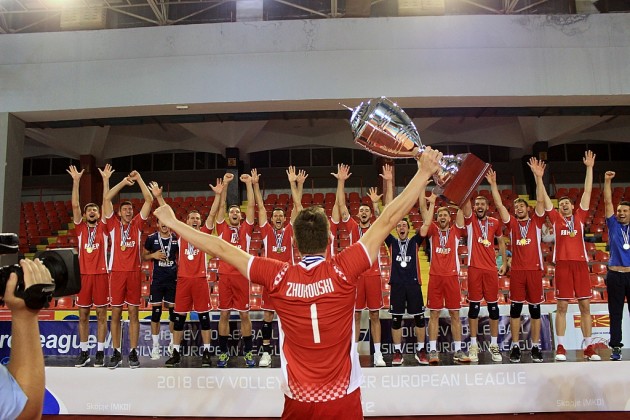 Croatia have never won a gold medal in any senior volleyball national team tournament before but were close twice in the old format of the CEV European League as they clinched silver medal both times (2006 and 2013).

Now, in Skopje, Former Y.R. of Macedonia, they conquered the newly formed 2018 CEV Silver European League and will play for a place in the 2019 Golden European League with the lowest-ranked team from this year’s edition of the same tournament.

In the final at Kale Sports Center, Croatia defeated Belarus in four sets, partially 25-16, 20-25, 26-24, 25-23, driven by the Silver European League overall best scorer Leo Andrić. A 23-year-old opposite added 29 points (5 aces, 2 kill blocks) to his account to end a tournament with 172 points of which he scored 57 in the Final Four. Ivan Mihalj added 6 kill blocks. Andrei Radziuk made 12 points for Belarus who spread their attacking arsenal to 10 players.

„Congratulations to my players! We are very proud! We won this competition and I think that we deserve this gold medal. In the final, we probably played our best match. We prepared very well for this tournament and I would also like to thank our federation. They created very good conditions for us. I would also like to send my greetings to all friends in Croatia,” Ivan Rančić, the head coach of Croatia, stated.

SILVER EL W: Sweden and Austria will play for title