That much anticipated and desired weekend is finally approaching for Italy’s rookie Unendo Yamamay BUSTO ARSIZIO that on Saturday, March 9, will be playing Azerbaijan’s Rabita BAKU in the first semifinal of the 2013 CEV Volleyball Champions League at Burhan Felek Volleyball Hall in Istanbul. Read latest volleyball news on Worldofvolley.com. 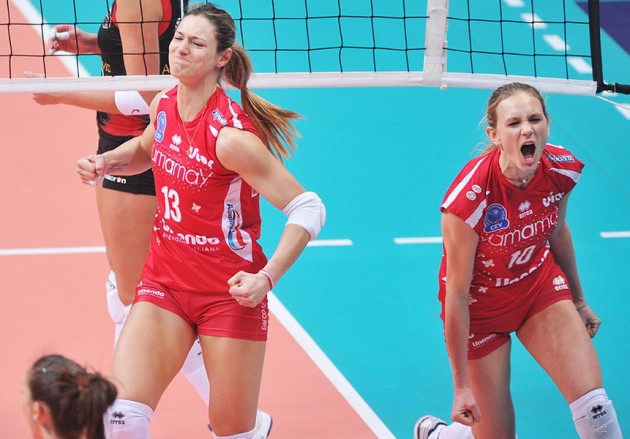 The players mentored by Carlo Parisi, nicknamed the “butterflies” in their home country, will fly on Thursday morning to Istanbul and have a few days to train and get ready for their semifinal fixture with the silver medalists from the 2012 FIVB Club World Championships. Some 150 fans will also travel to Turkey’s megalopolis to cheer on their heroines who are debuting in such elitist arena but whose actions will be followed by a delegation of about 30 reporters and photographers from the boot-shape peninsula.

USA setter Carli Lloyd has recovered from a long-lasting injury to support Valeria Caracuta and outside hitter Gilda Lombardo is also included on the delegation for the final four after missing the last round of the national league due to a problem on her shoulder. Though the match with Rabita will be tough, Carlo Parisi says: “I do not like to travel to Istanbul saying that we have nothing to lose. Of course Rabita is probably stronger than us but we’re going to play the game by showing the right attitude. This season we have seen that everything can happen also in this very elitist competition”.

Libero Giulia Leonardi adds: “We feel ready. Since for most of us this is the first appearance in a final four of the CEV Volleyball Champions League, we’re all very excited. Rabita is a powerhouse and but we’ll do everything we can to display the same energy and tempo we showed this past Saturday in the last round of the national league”.

“This is not something you can get many times in your career, I mean, to play the final act of the CEV Volleyball Champions League” team captain Christina Bauer stresses. “We must play our game and believe in our chances and everything will be good. I am happy that so many fans are coming to Turkey with us because their support means a lot”.

CUB M: Santiago is the only unbeaten team