Young Italian star Luca Vettori led Italy to their first World League medal since 2004 with a 3-2 win against Bulgaria at the 2013 World League Finals on Sunday. 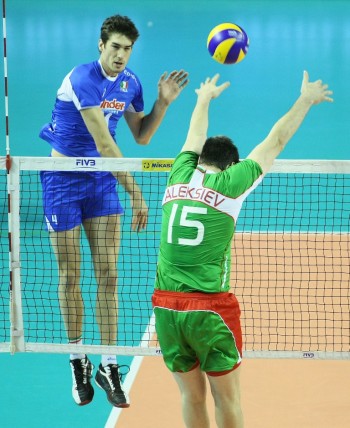 Vettori was the match’s top scorer with 29 points

Vettori, the youngest member in Italy’s Finals squad, was a late replacement for injured captain Cristian Savani and was the match’s top scorer with an impressive 29-point total.

“I feel very good,” he said. “I was a bit surprised because in semifinal I didn’ t play, but against Bulgaria I played a wonderful match. I didn’t expect this so to do very well is surprising.

“It’s incredible our victory and right now I’m really happy to have fun with my friends, my team.”

Despite the late call and the match’s importance, the 22-year-old said he wasn’t nervous.

“In the championship in Italy, I entered many times this way, so this sensation is normal. In the semifinal we wanted to arrive in the first place for the gold medal, but today, we wanted to win. The team right now are similar in height and spiking, but there is something else we have – and the speciality is the heart and the desire to do more than the other teams.

“We are a young team and there are many prospects among us, so at the European Championships we hope that we’ll do better than third place.”

WL: Sokolov – “We were surprised by Vettori”

Latina’s player went “outside” of arena to...