A full house with more than 5’000 spectators is expected for the final match of the 2012 CEV Volleyball Cup – Women which is set to take place on Saturday at 8:30 pm CET and whereby the local heroines of Yamamay BUSTO ARSIZIO will be trying to redeem the defeat they have suffered this past Tuesday in Istanbul to Galatasaray. 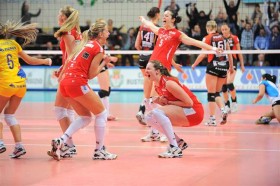 After claiming the CEV Cup already in 2010, Yamamay will need to score first a home win and then to complete its comeback by seizing the golden set in order to edge their opponents whose roster is headlined by Italian setter Eleonora Lo Bianco and Cuban spiker Rosir Calderon.

Some 400 fans from Turkey’s metropolis are also going to travel to Italy to support their favorites as the club has embarked on a quest for European glory after finishing third in the Challenge Cup a couple of years ago, a result that combined with another bronze medal in the CEV Cup dating back to 1997 remains the best ever on the international arena for the likes of Galatasaray.
The game is drawing very much attention also from the media and will be broadcast by Sportitalia 2 as well as live streamed by CEV partner LAOLA1.tv. Some 80 journalists and photographers have been accredited so far thereby confirming the special flavor and unique importance of this match for the Volleyball communities from Italy and Turkey.