Trio at the top in the standings of Serie A1 scored wins in 13th round! 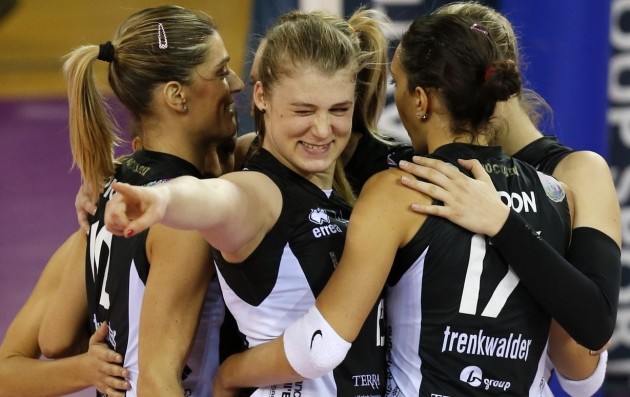 Samanta Fabris (in the middle)

Novara was led by Katarina Barun (18) and Kimberly Hill (14) while in the squad of the outsiders, Chiara Negrini with 13 and Carmen Țurlea with 11 points stood out.

Second-placed Liu Jo Modena supposed to have a rutine task in the game versus Metalleghe Sanitars Montichiari and it was after the first two sets, but the guests came back, leveled the score in sets and failed in the tie-break.

In Modena, Samanta Fabris scored, believe it or not, 40 points! She was followed by Laura Heyrman (17). It was enough against Montichiari’s duo – Berenika Tomsia (32) and Maren Brinker (18).

Third in the standings, Pomi Casalmaggiore beat Foppapedretti Bergamo in four sets thanks to 18 points of Marika Bianchini and 16 from Jovana Stevanović and Valentina Tirozzi. Bergamo’s top scorers were Sara Loda with 19 and Miriam Sylla with 14.

ITALIAN CUP M: Stoytchev – “This defeat should bring us back to ground”