ITA M: A1/A2 leagues will be played with Mikasa

Lega Pallavolo signed the partnership with Mikasa Corpration. Their volleyball balls will be used from 2012 to 2016. 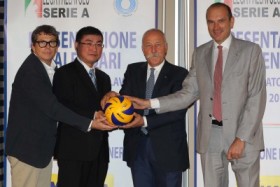 The Japanese company, a leading manufacturer of sports balls, always linked to the world of volleyball, can declare that all the major National Championships (over a hundred) are played with Mikasa balls, as well as the upcoming 2012 London Olympics, World League and European Cups, confirming the reliability of the product.

The agreement was officially presented to the press yesterday and was attended by the Director of International Sales for Mikasa, Daisuke Akiyama, who came to Bologna for this occasion from Japan, and the CEO of SG & B Mikasa, Stefano De Bortoli.

They attended the conference along with the President of the Lega Pallavolo Diego Mosna and CEO Massimo Righi.

The International Director Daisuke Akiyama has started by expressing his satisfaction with the agreement concluded: “I am very pleased to be here in Bologna to officially announce the partnership between the Mikasa Corporation and Lega Pallavolo. It ‘a special and exciting day for the history of our company, we hope that the collaboration will last a long time. Mikasa Corporation hopes to contribute to the growth of volleyball in Europe and Italy and for this I sincerely thank the President Mosna and all the leaders here today for making this possible.“

“The Italian League Serie A is certainly the largest in the world and is one of our objectives which further adds to the recent partnership agreement signed with the Brazilian Volleyball Federation and the many contracts we have signed all over the world. Soon the Olympics in London will start, we are the official suppliers since 1964, year of the Olympcs in Tokyo, we are happy because we received confirmation that we will be there until 2016.”

Stefano De Bortoli then answered: “For ten years we have the opportunity to collaborate with the Lega Pallavolo clothing many teams. I thank to Lega Pallavolo for the closing of this agreement.“

Massimo Righi, CEO of the Lega Pallavolo concluded: “This is important because it allows us to use the ball that is used for all international events. Because of this I hope this is going to be a long and profitable partnership.“