CL M: Arkas did their best, but Lube’s dream team qualify for next round!

Italian Cucine Lube Civitanova finished what they started in the first leg of the CEV Champions League Playoffs 12, two weeks ago. After smashing Turkish Arkas İzmir on road 3-0, Lube took another pretty confident win, at home 3-1 (25-14, 23-25, 25-18, 32-30) and qualified to the Playoffs 6! 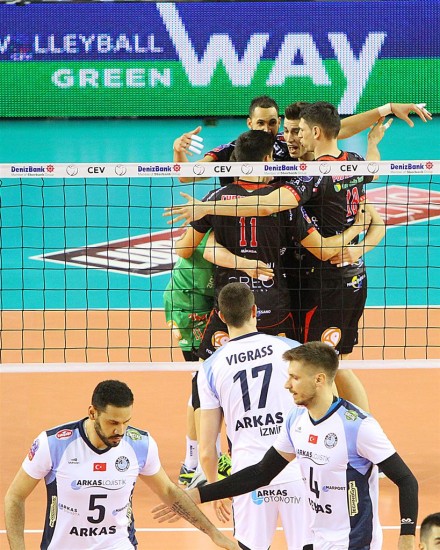 It is unbelievable how Arkas’ players managed to drop 7-3 lead in Set 1. It all began with service error from Rouzier which initiated Lube’s 9-1 run (12-8)!  Cester in the field and Juantorena from service line created this magnificent turnaround that determined the rest of the set 25-14.

The second set also had one huge run, but this time it was from Arkas. At 6-6, the Turkish side went ahead to 11-6 (5-0 run) which was crowned by the block from Shoji. Lube approached to 11-8, but Arkas made another gap 15-8. Lube’s coach Gianlorenzo Blengini was not satisfied with Juantorena’s and Čebulj’s performance and sent Priddy and Parodi to the field, while Arkas continued to play superbly 18-10. From 21-14, players of Arkas committed so many errors, but still, they had set ball at 24-21. Since they failed to convert it, Lube approached to 24-23 after Cester’s ace! Maurício decided it has to be over 25-23.

At that point, Arkas needed to win two more sets only to take the match to Golden Set, while Lube needed only one to go to the next stage.

By introducing Stanković, Blengini wanted to shake his team a bit and he made it. Along with Juantorena, Stanković was the key player when Lube took 14-10 and 16-12 despite Rouzier’s efforts on the other side. When Fei fired ace for 22-16, Lube’s fans could start celebrating participation of their team in the Playoffs 6.

CL M: Anastasi – “There is a very big difference between our teams”