CL M: Lube recover from 0-2 to down Halkbank in tie-break, Trentino demolish Belogorie!

We did not expect nothing less from two European giants Cucine Lube Banca Marche Civitanova and Halkbank Ankara in the first leg of the CEV Champions League Playoffs 6! 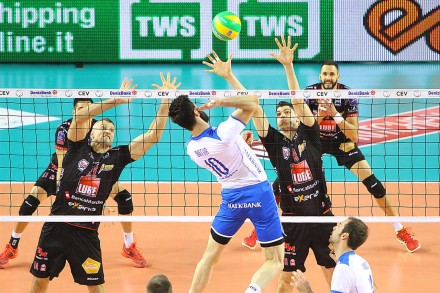 Everything went well for the visitors as they managed to make turnaround in both Set 1 and Set 2 after Lube had several points of advantage. On the wings of loud fans, Lube made turnaround of their own and reached tie-break.

Micah Christenson pointed out Marko Podraščanin in offense at the start of the fifth set (4-2), but then Michał Kubiak converted couple of really tough balls (4-4). Tsvetan Sokolov could not find pace in tie-break, but on the other side, Reid Priddy could 9-7. Thanks to Kubiak, Halkbank returned 9-9, but at 10-10, everything went downhill for the guests. Dragan Stanković blocked Sokolov, Kubiak and Dick Kooy sent ball out of bounds… Lube had 4-0 run! Priddy finished it 15-11.

Osmany Juantorena topped scorers of Lube with 19 points. Bulgarian Sokolov had 18 in Halkbank.

Belogorie managed to impose a serious struggle to the hosts only in the third set, but in the balanced game, Trentino were more accurate and now they need to win two sets in the second leg to go to the Final Four in Kraków, Poland.

The two convalescents in Trentino, Filippo Lanza and Mitar Djurić were in protocol, but only Lanza played, and as substitute.

Slovenian Tine Urnaut scored 19 points for the winning team as the best scorer while Dmitriy Muserskiy had 13 in Belogorie.