ITA M: President of Perugia – “Kovač is not the one to blame for defeats, I expect more from Zaytsev“ 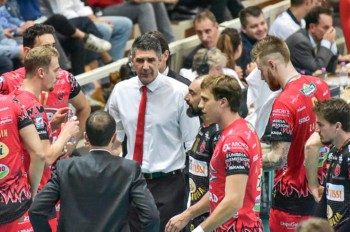 Slobodan Kovač will remain head coach of Sir Safety Perugia! That was confirmed by club president Gino Sirci, who gave a very interesting interview for gazzetta.it.

“Kovač is untouchable! He is our coach and he is not the one to blame for the defeats. I would rather say that there are some players who are not meeting our expectations and we definitely want to see much more from them…” said Sirci and then revealed one name:

“Ivan Zaytsev we know is quite a different player than the one who was playing against Modena. I expect much more from him. Seeing his 31% in offense is just way below the required level. But, I cannot only blame him, as many of his attacks came after bad receptions. We need to be much stronger in attack.”

Sirci also denied all those rumors that Perugia is interested to appoint Radostin Stoychev as new head coach.

“I heard those rumors, but I do not even have Stoychev’s phone number. And I do not need it, as we have our coach and we intend to keep him.”

POL M: Who will be new head coach of Poland – 16 candidates applied for the job! (LIST)