Arkas Spor İzmir, reigning champions of Turkey, finally started to remind on the team that was unstoppable last season in Division 1, and after suffering three defeats at start of competition, they achieved two wins in a row. 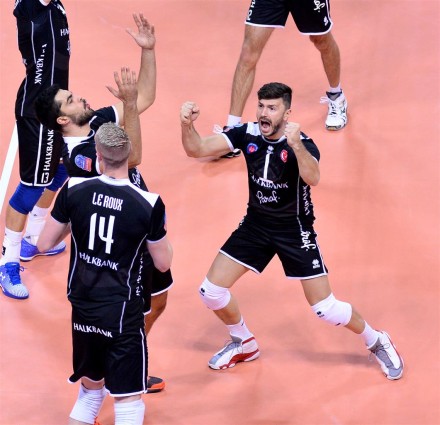 Arkas’ coach, the Canadian Glenn Hoag, is slowly completing the puzzle. His team scored straight-set victory 3-0 (25-20, 25-19, 25-22) against home side of Beşiktaş with 17 points from the French opposite Antonin Rouzier. Dutch Niels Klapwijk scored same number of points in losing team.

Silver medalists, Halkbank Ankara, returned to the top spot in the standings with a clear 3-0 win over İstanbul BBSK. With 26 points, the French Kévin Le Roux from Halkbank outscored American William Price (18 points) on the other side. Interestingly, Halkbank’s coach Lorenzo Bernardi once again didn’t include his compatriot, the setter Dragan Travica, into line-up. Travica started only one match so far.

Galatasaray HDI Sigorta İstanbul kept disappointing their large base of fans all over Turkey. If they continue to show poor performances, qualification to the final stage of the national championship which decides title holders, will be unreachable for them.

Ernardo Gómez, Venezuelan opposite hitter who came to İnegöl with an aureole of a Greek champion with P.A.O.K. Thessaloniki, once again draw attention to himself in the jersey of a new club. He scored 29 points!

Another player from South America stood out in this match – Colombian Líberman Agámez, who scored 14 points in Galatasaray.

CL M: When luck is on your side – Marechal performs head save!!! (VIDEO)