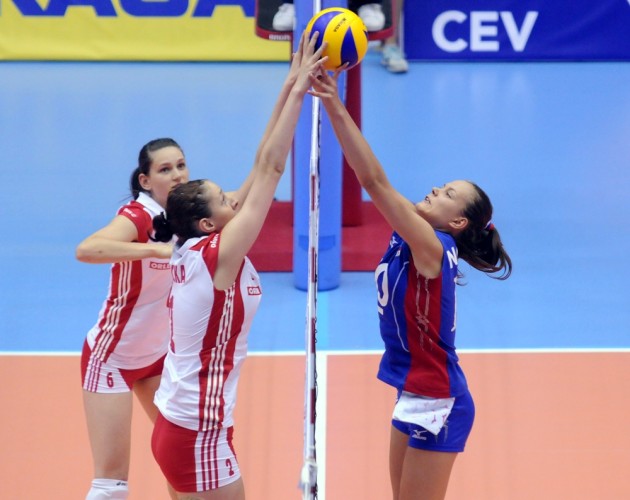 In the eagerly-awaited duel between Pool II’s top teams Russia and Poland, Russian powerhouse overcame Poland 3:1 (25-22, 21-25, 25-21, 25-18) to take the exclusive lead in group II. Russian opposite Irina Voronkova topped the scorers with 23 points.

Poland made an excellent start into the game and put the Russian passers under pressure (8-3). However, the plot started to change after a time-out called by Russian head coach Svetlana Safronova at 6-14. The young Russian talents slowly but surely started to narrow the gap. At the second technical break, Poland still led by three units, but the last part was controlled by Russia and Kseniia Ilchenko finished the set with an ace at 25-22. Even though Russia was still the dominant force in the beginning of the second period (8-6), the Polish ladies took over control after the first technical time-out and never looked back (25-21).  However, the Polish game was too irregular today. The youngsters of head coach Andrej Pec tried to resist as much as they could, mainly in the second part of the third set, but the Russian express seemed unstoppable (25-21). Although Poland stayed close in the beginning of the fourth and last set (7-8), Russia kept the upper hand and subsequently widened the gap until the end (25-18).

Poland head coach Andrej Pec: “The team with the better serves won. Unfortunately, we managed only in the second set to put enough pressure on our opponents. We had a big advantage in the first set, but for some reason we suddenly stopped playing.”