Another year in Kazan and another European crown for Matt Anderson! After the big win in the 2016 CEV Men's Champions League Finals, the American international gladly accepted to share his impressions in the interview for WorldofVolley. 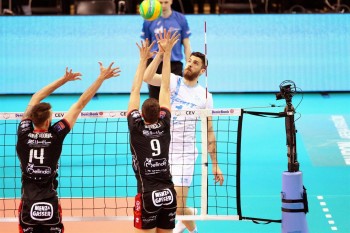 “It was incredible,” started Anderson, obviously very pleased because his Zenit Kazan have once again won the CEV Champions League. Then he continued:

“First of all, I think I played… terrible. But, the good thing about playing in a team like this is that we carry each other. When some players aren’t playing well, they find a different way to help the team. This time my job was, more or less, to limit my errors and let the big guns go at it. Luckily for us, Leo (Wilfredo Leon) came alive at the service line, Max (Maxim Mikhailov) started winning a lot of points for us, while our middle blockers also started making some good touches… Generally, we started playing some good volleyball.”

Anderson added that everyone in Zenit Kazan were well aware that the game against Trentino was not going to be easy.

“The thing about Italian teams is that they always have a good system for volleyball. Regardless of who they are playing against, they always have a chance because of the way they play, because of the way they build their tactics. So, we knew before the match that was not going to be a 3-0 win. We knew that Trentino would fight and push our limits. In the first two sets they did it, they came on top. But, then we started serving much stronger and putting pressure on them. I think couple of their guys ran out of gas a bit. We started trusting ourselves and it paid off.”

JTEKT’s coach attended F4 in Krakow – “This is incredible”

he is right trentino gave coach alekno to think and push their limits. i think that trentino got sooooo pressured after zenit won the 3rd set.