Former Italian national team coach Massimo Barbolini said he is very happy to be now in charge of Turkey, which he leads for the first time at the FIVB Volleyball World Grand Prix,which starts on Friday 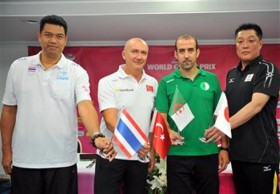 The coaches of (left to right) Thailand, Turkey, Algeria and Japan are ready to start the World Grand Prix Pool C in Ankara on Friday

Barbolini, who lead the Italian women’s team to World Cup and World Grand Champions Cup success, swapped Italy for Turkey after the 2012 Olympics and now leads the Turkey women’s team into the 2013 World Grand Prix, starting with Pool C action on home soil in Ankara against Algeria at 11:00 (GMT) on Friday.

“I’m really happy to be here and really proud of being the head coach of this team,” Barbolini told the official press conference. “The World Grand Prix is really important. We need to improve our level little by little every day. We have another goal in September, the European Championship. But match by match, step by step we’ll go through our goal I hope. All of the matches in this World Grand Prix are very important. I hope we’ll reach the Finals in Japan.”

Japan coach Masayoshi Manabe: “We are automatically qualified for the Finals in Sapporo in Japan as hosts but we’ll do our best day by day and match by match to be at the top of our game by the time of the Finals.”

Thailand coach Kiattipong Radchatagriengkai “This is our first time to join the World Grand Prix in Turkey. We know the Grand Prix is very important for our team because we learn from the matches we played in the previous Grand Prixes. We hope we do our best this year. We’ll fight every game.”

EXCLUSIVE, Ivan Miljkovic – “I just have...