European Champions, Serbia left today to Wuhan, China, where they are going to participate in matches of Pool N of World Grand Prix, scheduled from August 16 to August 18. 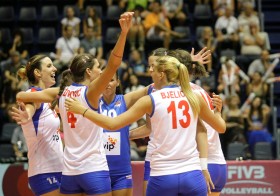 Serbia celebrating after win against Algeria

In Pool N, Serbia is going to meet the teams of Poland, China and Argentina.  The head coach of  Serbia, Zoran Terzic has announced the line-up of Serbia today:

After second week of World Grand Prix, Serbia is at the third place with 16 points total, one point less than China and Japan. Japan and five other most succesfull teams will be qualified for the Finals.

For more information from this country, read World Grand Prix 2013.