WCHU23 W: Clash of Titans between China and Dominican Republic

China and Dominican Republic are set to play for the gold medal of the inaugural FIVB Women’s U23 World Championship Open on Saturday night at the Baja California High Performance Center. United States and Japan will meet for the bronze medal in the previous match. 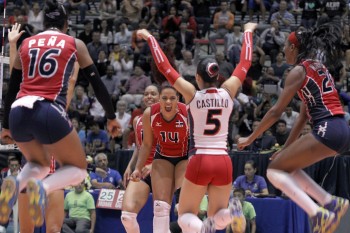 “Even though we won the game, the Japanese team had a better technique,” China’s coach Xu Jiande said. “I think our players are taller than the Japanese players and that was a key factor.”

Brayelin Martinez led the Dominican Republic with 21 points, followed by Yonkaira Peña who tallied 11 points. McNeal Sha’Dare and Gina Mancuso finished with 12 and 11 points for USA.
“These are very young girls but also very disciplined and with a lot of experience in age-group competitionsT,” Dominican Republic’s coach Marcos Kwiek said.

“It was a hard fight,” USA’s coach Karch Kiraly commented. “It is good for both teams. They played a great game. Especially they came out very strong to start with.”
In the matches for the 5-8 positions, Turkey demolished Germany 25-13, 25-13, 25-19, while Italy downed Brazil 25-13, 26-24, 25-22.
Early Saturday, Turkey and Italy will play for the fifth position while Brazil and Germany have to settle to battle for the seventh place.