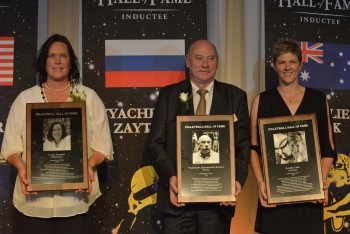 “Natalie Cook, Caren Kemner and Vyacheslav Zaytsev made unique and lasting impressions on our sport and the Volleyball Hall of Fame is honored to memorialize their accomplishments here in Holyoke,” Volleyball Hall of Fame Executive Director George Mulry said. “It was wonderful to have five representatives of the FIVB founding National Federations present for the Court of Honor recognition. Volleyball is truly a global sport and it is special when people from around the world are able to travel to Holyoke and experience the birthplace of their beloved sport.”

Kemner, a dominating outside hitter on both offense and defense, competed in three consecutive Olympic Games starting in 1988 and helped the United States capture the bronze medal at the 1992 Barcelona Olympics. She was selected to the “All Spectacular Team” following the 1992 Olympics. Kemner led the United States to its first FIVB World Grand Prix gold medal in 1995.

Zaytsev earned three Olympic Games medals as the setter for the Soviet Union. After aiding the Soviet Union to the silver medal at the 1976 Montreal Olympic Games, Zaytsev reached the top step of the Olympic podium with gold in front of the home crowd at the 1980 Moscow Olympics. Zaytsev returned to the podium at the 1988 Olympics with another silver medal. He helped the Soviet Union win the FIVB World Championships in 1978 and 1982. “The Hall we visited today is the Volleyball Hall of Fame,” Zaytsev said through an interpreter. “It is about fame and glory. The Hall is my own home because of these reasons. Now I am in this Hall with this induction. Thank you to everybody who helped me to be here in my home.”

The Court of Honor recognized the 14 National Federations that met in Paris in April 1947 and worked to establish the FIVB. The countries who were present at the 1947 meeting included Belgium, Brazil, Czechoslovakia, Egypt, France, Hungary, Italy, Netherlands, Poland, Portugal, Romania, Uruguay, United States and Yugoslavia. Today the FIVB counts 220 affiliated federations making it the largest international federation affiliated to and recognized by the International Olympic Committee. The Court of Honor was established in 1988 to honor an organization or team for its significant contributions and commitment to the sport of Volleyball.