Tokyo, Japan, December 5, 2011 – The FIVB Volleyball Men’s World Cup 2011 has ended but Iran’s journey into becoming one of the top teams in the world have just started. 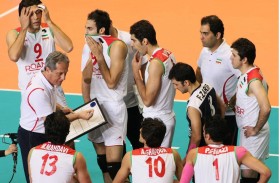 They may have finished ninth overall in the competition but the experience they gained from this will benefit their young players such as Amir Ghafour and Pourya Fayazi.

Iran’s goals are still on target, since Julio Velasco’s appointment as head coach, they have won the Asian Championship and have qualified for the FIVB World Cup. Unfortunately, they did not make the final cut at the FIVB World Cup but will still have the chance to redeem themselves in the continental qualification tournament in June.

Velasco’s personal goal is to make the team one of the best teams in the world and they have definitely showed a lot of promise during the competition as they beat strong opponents such as Serbia, Poland and Argentina. Somehow, Velasco transformed this mysterious squad into a great Asian force with a great future.

Iran believes that it is time for them to move on and look ahead but to also keep in mind the mistakes and weaknesses they had playing at the FIVB World Cup. They understand that this competition is the first step to becoming a good team due to the exposure they got playing against strong teams. They also believe that a single meeting will not help them achieve their goal – but rather they must strive for more meetings with the best teams.

Pourya Fayazi claimed that his level of play at the FIVB World Cup have gone up. And when it comes to depth and talent of the team, Fayazi is confident that there are many young and good Iranian players to come who will definitely brighten up Iran’s future.