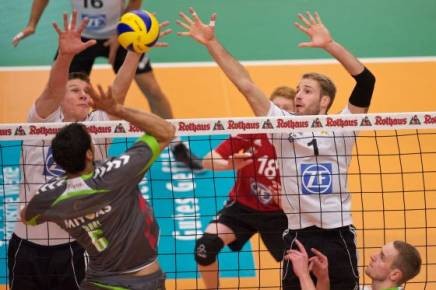 “It is my great honor to announce today’s MVP“, said speaker in the hall Nico Brugger to the audience shortly after the end of the game in the arena of ZF.

“From my heart I congratulate Yannick Harms“

This was his debut in the Bundesliga Volleyball. The young player could not believe his ears. The crowd and players congratulate 17-year old  player for the successful start of the 3:0 victory (25:15, 25:19, 25:18)

“It’s a great honor for me,” said to Harms. “At first I was a little nervous but I quickly find my place in the team so now we can celebrate together.”

Harms, who plays from 2010 for Volley YoungStars Friedrichshafen replaced Nikola Rosic because he gone to the World Cup in Japan.

“He quickly find his place in the team and showed good results” said  Captain Joao José. “He knows to read the game very well and knows where he should stand on the field“

GER M: The championship title is back...