CEV: Poland emerges as winner against a tough Dutch team in Ankara

Ankara, Turkey, May 1, 2012. The women’s national team of Poland made a successful start of its campaign at the 2012 Olympic Games - European Qualification that got under way in Ankara today. 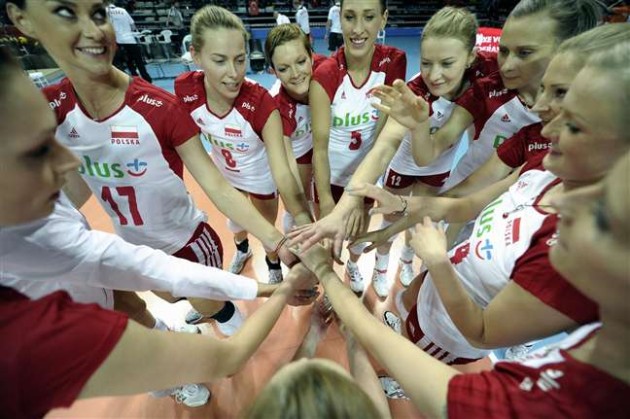 The first set started pretty even with the Netherlands holding onto a 1-point lead at the first technical time-out. With Berenika Okuniewska behind the serving line and with a number of Polish fans cheering from the stands of Baskent hall, Poland managed to come back from 9-11 and achieve a turnaround to 15-11. Poland’s better efficiency in attacking and blocking helped Alojzy Swiderek’s team pile up an even more impressive advantage of 25-18 by the end of the set.

Some great defensive play on both sides of the net produced a number of long and spectacular rallies in the second set rewarded with applause by the appreciative audience.  The Oranjes improved their attacking efforts in comparison to those of Poland, but the Polish block was still way more prolific. After several changes in the lead, another dramatic turnaround for Poland close to the end of the set produced a final score of 25-23 in this second part.

Noisy Turkish fans started to fill up the seats in anticipation of the next match of the day, but the teams on the court had no intention of making way for it so soon.  Gido Vermeulen’s players stepped up their performance in set 3, especially with the block starting to contribute to the Dutch tally, and maintained control through the first half of the set.  Poland once again managed to come back from behind and take the lead for 23-21, but this time the Oranjes persevered to close the set in their favor with four consecutive points.

Under the thread of a risky tie-break, Poland completely dominated in the fourth set.  The girls in white and red managed an early lead that they only were able to expand to an impressive 25-13 at the end of the set and thus to seal the victory.

Katarzyna Ewa Skowronska-Dolata became the leading scorer of the match with 19 points for the winning team. Anna Werblinska added another 16, impressing with the eight kill blocks for Poland. Captain Manon Flier was most prolific for the Netherlands with 11 points.

A disappointed Manon Flier thinks her team could have done better. “In the third set we played better and did not give up,” she said.  “But I don’t know why we could not play well in the fourth set. It was probably because of lack of confidence.”

Polish captain Katarzyna Skorupa is happy to win the first game of the tournament: “It was only the first step and we want be successful in the next steps as well.”

Dutch mentor Gido Vermeulen congratulated the Polish team for the victory: ”Poland played better, especially in defense, and won the match.  We prepared well and thought we could win the match.  I am proud of my players, because they fought for each ball.”  “3:1 is a good score to start with,” Polish head coach Alojzy Swiderek said.

“In the third set we played worse than in the previous two as we lost many points before the second time-out.  But then we played better again and won the game.”