Ankara, Turkey, May 1, 2012. Germany left no doubts about which team deserves the victory in the very first match of the 2012 Olympic Games - European Qualification for women in Ankara. The squad mentored by Italian-born Giovanni Guidetti hammered out a convincing 3:0 (25-12, 25-16, 25-17) win over a Croatian team handicapped by the absence of a couple of sick players who did not make it onto the roster for this match. 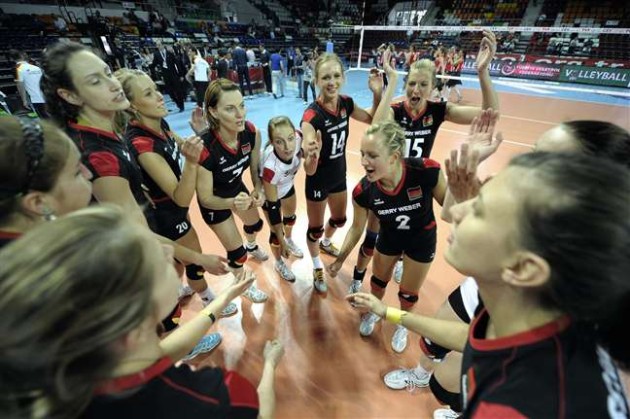 Germany completely dominated from the very beginning of the first set and continued to extend its lead from 8-5 to 16-10 between the two technical timeouts. With 100% positive reception from their teammates, both German setters – Kathleen Weiss and Mareen Apitz, did a great job engaging all hitters, while Croatia made too many errors in attack and additionally helped its opponents break away.  The German block also started contributing more and more to enlarging the gap and it scored the last point to conclude the set at 25-12.

The story of the second and the third sets was quite similar.  Only Germany started to make some errors to allow Croatia to stay closer behind on the scoreboard during set 2.

Towards the end of this second part, again Germany’s block had the main role in making the result more convincing with a kill block by Margareta Anna Kozuch closing it at 25-16.

In the third part of the game the Germans were able to accumulate a 10-point lead only to allow Croatia’s efficient serving towards the end to reduce it a little.

The team that made fewer unforced errors in this set was the one that triumphed as a winner. Angelina Grün who ended up with 10 points for the winners and Jelena Alajbeg who accumulated 10 points for Croatia became the top scorers of the match.

It was a great match for Germany, according to Mira Topic, captain of Croatia.

”They were particularly good in defense while we made lots of mistakes and lost.”  Her German counterpart Margareta Kozuch added: ”We are happy to start with a victory in a tournament that is so difficult for all teams.  We are already looking forward to the next games.”

Croatian head coach Damir Jurko congratulated the German team for the victory and for playing better.  “We made many mistakes, especially in attack and we lost,” he explained.

“The German players were technically better than us.  It is a pity that some of our players were sick and could not take part in this match.”

It was a good game, according to the head coach of Germany Giovanni Guidetti.  ”We played very well as a team, which is important in a tournament like this. We made fewer mistakes than Croatia and I am happy that we won,” he concluded.

CEV: Poland emerges as winner against a tough Dutch team in Ankara