World Cup less than 200 days away

It is now less than 200 days until the start of the FIVB Volleyball Women’s World Cup Japan 2015, with the men’s tournament also fast approaching. The road to Rio may start in Japan, but it is just one step on a long journey between the two events. 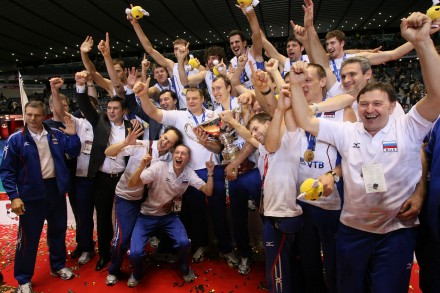 The women’s edition is set to take place from August 22 to September 6 before the world’s top men’s teams take to the court just two days later, with their tournament slated for September 8 to 23. It means that volleyball fans will be able to catch over a month of top action as the hunt for a Rio 2016 Olympic Games berth begins.

The World Cup Japan 2015 is the first step on the road to qualification for the Games, allowing teams a head start in their preparations for Rio 2016.

That extra time proved vital for 2011 men’s champions Russia. The current world No.2 won 10 of their 11 matches at the tournament, beating the likes of Brazil, USA and Poland to gold. They then went on to win gold at the London 2012 Olympic Games less than 12 months later becoming just the second team to win both tournaments within the same cycle since the World Cup was made an Olympic qualifying event in 1991.

Brazil, who finished third at the tournament in 2011, are the only other team to have achieved the same feat having won the 2003 World Cup and then gold at the Athens 2004 Olympic Games.

Completing the podium in 2011 was Poland, whose five set loss to their Russian counterparts in the final match of the tournament saw them resigned to silver. However, they will be hoping to go one better and take top spot for the first time in their history after their stunning gold medal success at the FIVB Volleyball Men’s World Championship Poland 2014.

Italy’s women have seen much success at the World Cup tournament in recent years, winning back-to-back titles in 2007 and 2011. They have never been able to convert that success to the Olympic Games however, failing to make the podium on both occasions.

In fact, the United States were the only team to clinch a medal at both the 2011 World Cup and London 2012 Olympic Games, finishing with silver at both.

Completing the podium in Japan four years ago were China, who added a second bronze to go with their collection of one gold and one silver. The world No.3 are the last team to have won both the World Cup and the Olympic Games within the same cycle, clinching the 2003 edition of the tournament before following up with their golden run to the top step of the podium at the Athens 2004 Olympic Games.

Ivan Miljković for WoV: “The recovery time is not known yet”