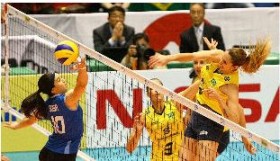 Brazil improved their record to 6-3 while Argentina dropped to 3-6. The winners held the advantage in the blocking category 12-6. Welissa “Sassa” Gonzaga earned the Most Impressive Player award. She scored 12 points alongside Thaisa Menezes’s 13 and Sheilla Castro’s 10. The only Argentine player to get into double figures was Lucia Fresco with 10 points.

Argentina started brightly with a block by Emilce Sosa on Sheilla Castro and a couple of good spikes by the same player, but even though the Brazilians started slowly, they are always hard to shake off and Sheilla Castro landed some slick shots to keep the scores close. Big-hitting Argentine Lucia Fresco also found her range early, but Brazil had more sluggers, more power and more variation and once the likes of Sheilla, Paula Pequino and Sassa got into their stride, it was tough for Argentina to keep up. At 18-17, Paula sent down a monstrous smash. Although it was sandwiched between two huge kills by Leticia Boscacci, Sheilla came up with a pair of her own as Brazil inched towards winning the set. Successive mistakes by Argentina – a netted serve by Antonella Bortolozzi and a mis-set – handed Brazil a four-point lead at 23-19. A shot down the middle by Fabiana Claudino earned setpoint for the Brazilians and Sheilla put her team 1-0 up with a crisp crosscourt smash.

Brazil breezed into a 5-2 lead at the start of the second set with good blocks by Paula on Fresco and Sheilla on Fabiana Oliveira, but Argentina clawed their way back and were level at 5-5. Fabiana added a block on Boscacci as the Brazilians continued to defend well and they started to pull away from 8-8.

Two good shots and a block from Thaisa Menezes helped them to a four-point lead at 12-8 and a spike by Paula made it five at the second technical timeout. But Argentina were fighting hard and would have had far more luck against a team defending less resolutely. Both sides contributed to a brilliant rally at 21-18, but it was Brazil who prevailed with a shot by Thaisa. The 196-cm middle blocker then came up with two great blocks on Fresco to bring up setpoint, which Sheilla converted with a spike.

Sassa was on fire at the start of the third set, sending down two crunching spikes and three scorching serves that had Argentina in disarray – and 8-1 down at the first TTO. Argentina coach Horacio Bastit called his players off court at 10-1 and Fresco stopped the rot with a neat block on Paula. Both sides went off the boil for a while, but a Sassa smash put Brazil 10 points up at the second TTO and then, with Argentina offering little resistance, it was only a matter of time. Brazil subs

Tandara Caixeta and Adenizia Silva came in and did a very good job and after a mis-set brought up matchpoint, it was Silva who ended the match with a spike.