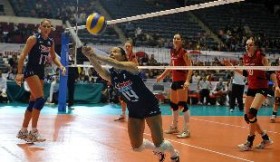 Tokyo, Japan, November 16, 2011 – Defending champions Italy became the first team to join hosts Great Britain at the London 2012 Olympic Games as they beat European neighbours Germany 3-2 (22-25, 22-25, 25-21, 25-13, 15-13), in an outstanding match of stamina, character and mental strength in their fourth round match at the FIVB Women’s World Cup in Yoyogi Stadium on Wednesday.

With the top three teams at the FIVB Women’s Volleyball World Cup qualifying for Olympic Games London 2012, Italy maintained their unbeaten record with a stunning victory full of character to come back from two sets down, claiming their ninth win from as many matches to move to 25 points, two ahead of second place USA and five ahead of third placed China with Japan and Germany a further point back on 19.

With two games remaining for each team, Italy’s points total can be matched by other teams depending on the remaining results, but Italy’s superior win record will keep the world No. 7 in the top two, even if they lose their next two matches without picking up any points. The win reversed Italy’s straight sets semifinal loss to Germany in the European Championship semifinals and was also the Squadra Azzura’s 11th in 12 matches against the world No. 9 dating back to the Sydney 2000 Olympic Games and the only time it was with a 3-2 score line.

Women’s World Cup Results/Standings, Match Info, Photos or Live Scoring Once again, Carolina del Pilar Costagrande led the way for Italy with 27 points, equalling her best performance of the tournament and the fifth best performance overall on her way to being named Italy’s Most Impressive Player, despite having trouble mustering an attack in the first two sets. The experienced Simona Gioli was her usual consistent self with 16 points while captain Margareta Kozuch led the way for Germany with 22 points in a match that her side controlled early on, but let slip away. Corina Ssuschke-Voigt put up a tournament record equalling eight blocks in a great defensive effort.

“I am really happy, I think we have played one of the best matches in this tournament against a strong team who have played very well in all their matches,” Italy coach Massimo Barbolini said. “It is wonderful what [my team] are doing. In a difficult situation, down 2-0 my players were fantastic to win this match and qualify automatically for the Olympic Games.”

“Italy really showed why they are first in this tournament,” Germany coach Giovanni Guidetti said. “Their defence was something really special, and they started to play very good volleyball, and they deserved to win in the end. They are much more patient, they waited for our mistakes. they were better in the block and defence. I’m happy for our team, this point could be important for us. We still have a chance to take an Olympic spot in this tournament. Now we have to think about our match against Japan tomorrow.”

In a day of great feats with the top five teams in the standings in action at Yoyogi Stadium, an astonishing 37 point haul from USA superstar Destinee Hooker helped the World Grand Prix champions to an amazing 3-2 (25-21, 31-29, 18-25, 19-25, 15-10) win over China in the opening match of the day. The five set victory, the Americans’ eighth win from nine matches in the tournament and sixth successive win over China, saw the world No.2 side collect two points to consolidate their position in second. It was the fourth five-set match (three of them in defeat) three-time champions China have played in the tournament.

Supporting Hooker in her scoring exploits, which would have been a World Cup record if the Dominican Republic’s Bethania De La Cruz de Pena hadn’t scored 42 points against Germany in the third round, were Heather Bown with 16 points and Foluke Akinradewo with 15. For China, who were celebrating the 30th anniversary of their first World Cup triumph, Hui Ruoqi led the way with 25 points.

In the last game of the day, Japan kept their Olympic dreams alive and set up a crunch match with Germany on Thursday with a straight sets (25-22, 25-10, 25-9) win over Kenya. The win, Japan’s eighth out of eight against the Africa champions, puts the world No. 4 level with Germany on 19 points in fourth place knowing the loser of Thursday’s game will face an enormous task to finish in the top three with one game remaining.

Meanwhile, at the Tokyo Metropolitan Stadium the Dominican Republic continued their extraordinary capacity to provide a surprise by pulling off a remarkable comeback to overcome Serbia 3-2 (14-25, 19-25, 25-23, 25-22, 15-12), the first ever win for the world No. 14 over the European champions with the two countries having met three times in total. In the other two matches, Brazil consolidated their position in sixth with a 3-0 (25-20, 25-19, 25-9) win over Argentina – their eighth out of eighth against their South American counterparts – and Korea rolled past Algeria 3-0 (25-17, 25-21, 25-15), sealing just their second win of the tournament.

The World Cup, which offers tickets to the London Olympic Games to the three medallists, continues until November 18 after each of the 12 teams team has played each other once, offering three points for a 3-0 or 3-1 win (a 3-2 result gives two points to the winner and one to the loser). The men’s tournament follows in Japan from November 20 to December 4.

Japan coach Manabe – Today our serving was the key