Japan coach Manabe – Today our serving was the key 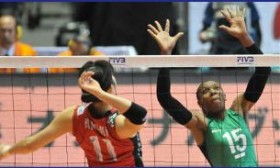 Tokyo, Japan, November16, 2011 – Press Conference, Japan vs Kenya: The hometown Japanese team delighted the fans at Tokyo’s Yoyogi Stadium with a straight sets win over an inexperienced Kenyan side on Wednesday. With the win, Japan keeps hope of a top three finish in the tournament alive.

On Saori Sakoda: She hasn’t had many chances to play in this tournament, but today she did well, especially attacking.

On tomorrow’s match: The German team is really strong, especially their serving. So serve reception will be quite important.

On today’s serving: The players practiced very hard and concentrated well in the match, so our serves worked well.

Japan player Saori Kimura: Today I’m glad to have won in straight sets, and I will prepare for tomorrow against Germany.

On tomorrow against Germany: It is important to serve and defend well. Germany is strong and we need to keep rallies going.

Japan player Saori Sakoda: I rarely play but today I had a chance, so I enjoyed myself today.

On the remaining two games: We need to make sure we score the first eight points early in sets, and we have to play very hard. We have to proceed point-by-point in such important matches.

On Germany tomorrow: Today I’m just happy to play in this game, and I hope the head coach can consider me again for the next game.

Kenya coach Paul Bitok: I would like to say Japan came to this match very strong, knowing they needed to maintain winning, because if they lose they can’t be in the top three. So they came strong to us, especially on their service, and they capitalized on our bad reception. They managed to counter attack when we gave them a chance. On our side we didn’t play well. We lost player number 12 [Lydia Maiyo] who lost her father and had to go home. Our reception was poor, and we didn’t attack as usual. But we will learn from today and try to see how we can improve.

Kenya captain Brackcides Khadambi: I would say today we didn’t play so well. We played at our worst and didn’t execute; our reception was not very good.

After playing with Ebata in Hitachi, what was her impressions of Ebata today: I think although she wasn’t in the whole game, but in the first set her service and attack was nice.