Doha, Qatar, December 22, 2011 – Egypt captured their fourth consecutive Arab Games women’s volleyball competition title by defeating Algeria in a four-set marathon (22-25, 25-23, 25-19, 25-20) in Doha on Wednesday with the men’s contest set to conclude on Thursday with the final between defending champions and hosts Qatar and African champions Egypt. 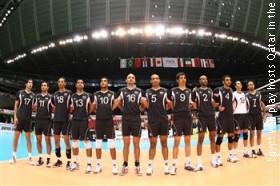 The women’s event was a single round-robin tournament with the gold going to the top-ranked team and both teams were tied at the top with nine points.

Although Algeria managed to win the first set, the scenario quickly changed.

Egypt cut out their mistakes at the net and on the serve while Algeria’s players began to make several unforced errors as they went eventually lost out.

“No it wasn’t a matter of revenge because we lost against Algeria in the semifinal of the African Championship,” Egypt coach Tahny Toson said.

“We were third and they were only second. But this victory raises the moral of my team in preparation for the qualification process for the Olympic Games”

Kuwait recovered from a first set loss and managed to control the game until the end to secure the fourth position.

Meanwhile the men’s volleyball tournament comes to an end on Thursdayas Qatar take on Egypt.

Four years ago, Egypt was considered the favorite to win men’s volleyball tournament at the 2007 Arab Games, as they were the host nation.

Surprisingly the ‘Pharaohs’ succumbed 3-2 to Qatar in the semifinal, while the Qatari team completed their magnificent progress in the tournament by beating 3-1 Bahrain in the finals.