Slovakia and Turkey open with strong performances in Poprad

Poprad, Slovakia, November 22, 2011. Slovakia and Turkey started the Olympic pre-qualifier in Poprad by claiming their opening matches with Austria and Montenegro in straight sets. 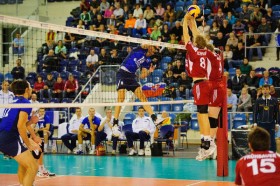 The home guys caught a slow start trailing 2:5 in the first set, before Emanuel Kohut leveled at 6 all. The turning point came as Martin Sopko scored two in a row to make it 21:18, thus paving the way for the final 25-21. Slovakia easily controlled the match in set 2 with Austria struggling in defense; the home guys set the pace by the second technical time-out with a margin of 6 (16:10) and wrapped it up at 25-14. Slovakia started strong also in set 3 (5:0, 11:3) and although Austria clawed back from 18:10 to 19:15, still the winners of the 2011 European League could take home the match in straight sets (25-19).

“We started slowly and our players were a little bit nervous in the first set. We made a lot of mistakes there. In the second part of the game we showed our strengths in attack and block, and I am happy with the win. Tomorrow we will play against Spain and it will be a totally different match” said Stefan Chrtiansky after his first match as head coach of team Slovakia.

“We had a good start, but I think Slovakia was the better team today. In the second and third set we had more and more problems in reception and we couldn’t deal with such a strong Slovakian team. We have to wait one day now to play our next opponent, Spain. They are a very experienced and competitive team, but we will try to use every chance we will get” added Michael Warm, head coach of team Austria.

The second match of the day started pretty well for Turkey that immediately went up 5:1 against Montenegro but the game was briefly stopped as the referees noted that Turkey’s players had some wrong names on their jerseys. The “second” match started again the right way for Turkey as Montenegro players were having many problems in reception and attack while Turkey scored regularly with Sinam Cem Tanik and Emre Batur. Turkey set the pace 10:2 and 16:9 before Montenegro woke up a little bit, but it was not enough and Turkey closed it out with a 25-19. Montenegro had an early 4:2 lead in the second set, but then Turkey came back and completely turned the score around. Montenegro made a lot of mistakes, while on the other side of the net Turkey played consistently going up 16:9 at the second technical time-out, before finishing it off at 25-20. Montenegro was not able to storm back and Turkey eventually claimed also the third set with another 25-20.

“It was very important to start this tournament with a victory because we want to go to the final. Our team played tactically very good and I think the victory was logic, because we shook their reception and it was easy for our block-defense to control their spikers. Our next mission to win the game with Estonia” said the head coach of Turkey, Veljko Basic.

“I can’t be satisfied, because this was not our game today. Our results in the preparation phase were great and we came to Slovakia in great shape, but tonight our performance was not good at all. I can promise that tomorrow owe will play much better because we want to keep a chance to advance to the semifinals. We have a young team and we need time to show our power. I hope we’ll already perform well for our second match here in Poprad” added the head coach of team Montenegro, Ivan Joksimovic.