Poprad, Slovakia, November 24, 2011. The hosts of Slovakia will play Turkey in the semis of the Olympic pre-qualifier in Poprad while Spain will test out the likes of Estonia on Friday. 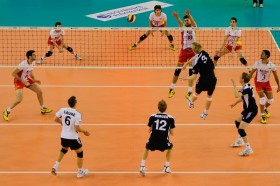 “We played much better than yesterday where my players thought they could win easily and they definitely underestimated our opponents. They didn’t play like they can” says Estonia head coach Avo Keel. “Today we played a good match and if we keep that level we can have our chances also in the semis. I am happy we got to play Spain in the semifinal because Slovakia is very strong at home and therefore we prefer to postpone this clash to the final” he adds.

“We had many problems in reception and we didn’t keep our level and rhythm of the game. Even in the second and third set, as we were dictating the tempo of the game, we could not finish the set. We are disappointed because we will have to play against Slovakia and I hope we will show a better performance there. We played against Slovakia four times this year and they are very strong at home. Yesterday they played very good against Spain. I know it will be hard, but one match is one match and we will do our best even if they are really favorite going into this clash” states the head coach of Turkey, Veljko Basic.

In the other match of the day Spain fought back after losing the opening set to Austria.

“This match was very important for us because we wanted to advance to the semifinals. Our play was not that consistent in the opening of the game, while Austria was solid in serve and attack. However, we improved gradually, controlled the service and block-defense of Austria and ultimately won in four sets. It does not count that much which team we play in the semifinals” says Spain’s mentor Fernando Munoz.

“We can take many positives from this game, we played much better with our block-defense system and now we can see that we have progressed throughout this past summer. We missed a lot of easy chances to score points; however, we saved a lot of difficult situations, especially in the second and third set. We know we are a small country and we have no Volleyball tradition, but in this year’s European Championship our young players have tremendously progressed. We have to continue with our work in this way and maybe in one or two years we will have a chance to beat opponents like Spain. We have to be patient and work hard” adds the head coach of team Austria Michael Warm.

M. Milinkovic: I still have fun on the court

Slovakia and Turkey open with strong performances in Poprad

WoV presents you TOP STATS from every...