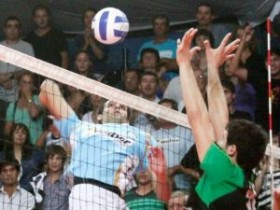 Both teams were playing for the classification in this game, using all their energy to achieve the desired success.
The first to take advantage was Bolivar, thanks to the counterattack of Filardi (8:6) and Evandro scoring 11:7.

The service of Solé and the error in attack of Laneri allowed Bolivar to take advantage. From the counterattack, Jekic scored 18 point. Finally, Rosario closed the set with the attack from the middle (25:18).

In the second set the guests took the lead from the start (0:3). However, Bolivar knew how to recover and evened the result with the ace of Jekic (5:5). The mistake of Laneri led Bolivar to 10:7.
Then Moine requested timeout to change the score, which did little, since the attacks of Evandro and his teammates were indefensible (16:11).
PSM managed to recover with a good defense (20:18). However, Bolivar returned the leadership thanks to Jekic with 23:18.
Then, Gonzalez made an error and Bolivar won with 25:21.

In 3. set, Solé provided the lead of 3:1. However, PSM reversed the situation thanks to Gonzalez and Laneri in counterattack, that turned the score (3:6). Bolivar could not recover (8:13) and Weber called his first timeout.
That was not enough, therefore, he ordered  the entrance of Giani and Deppiaggi Arroyo.
The team managed to recover emotionally because the difference in score was lower (15:19).
However, the set was closed in favor of PSM, thanks to the point of Laneri (18:25).

In 4. set, PSM took advantage quickly (2:4). With a great block of Romanutti Guido it got to 6:9. Then Crer changed the result in favor of Bolivar with 9:10. In the second part, Bruno Romanutti (brother of Guido) maintained the even score 18:18.
Thanks to the block of Solé, Bolivar got to 21:19 and led his team to the victory.
Finally, the center Crer scored the last point for Bolivar, that won with 25:18.

ARG M: La Union de Formosa returned to training and is preparing for match against UPCN