The hosts Iran will play for the title at the 2019 Asian Men’s Volleyball Championship in Tehran after beating South Korea in the semifinal match that has been overshadowed by a brawl in the finish of the fourth set. 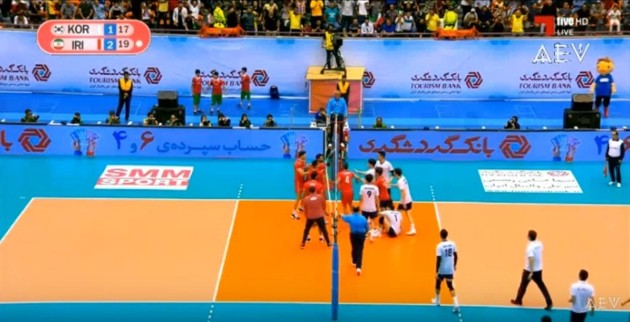 Iran recovered from losing first set to South Korea in the match that lasted for 2 hours and 6 minutes and which escalated into a brawl in the fourth set: 3-1 (22-25, 25-23, 25-22, 25-22). At 18:17 for Iran in Set 4, Milad Ebadipour of the home team scored a point by being stronger to the Korean setter Hwang Taek-Eui on the net. Hwang’s teammate, the libero Jeong Min-Su, did not like the reaction of Ebadipour after that (he stared at a rival who he was lying on the ground, not visible if he trash-talked him) and ran to Iranian player to confront him. That is when other players got involved… The result of all this was two red cards, for Jeong and Ebadipour, and match interruption of more than 10 minutes. Amir Ghafour top-scored for Iran with 20 points, while Seyed Mousavi made 5 kill blocks. Jung Ji-Seok scored 15 points for Korea.

In the other semifinal, that lasted two minutes less compared to Iran vs. Korea despite having a maximum of five sets (the reason for this explained above), Australia eliminated two-time defending champions Japan. The “Volleyroos“ were forced to chase rival’s lead in sets two times before prevailing in the tie-break: 3-2 (20-25, 25-18, 16-25, 25-22, 15-12). Who else, but Thomas Edgar, led Australia to the win worth of gold medal match. He poured in 24 points (4 kill blocks) of which 9 in the second set. Trent O’Dea set up 4 kill blocks as well. Yiju Nishida was impressive for Japan with 26 points.