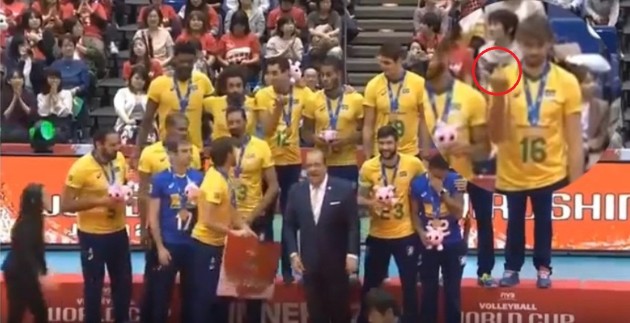 After being elected the best player on his position in the tournament, Lucão made an obscene gesture during the medal ceremony, showing his middle finger after receiving a gold medal. This gesture will be a subject of an investigation by the International Volleyball Federation (FIVB) who stressed it was aware of the case.

“As the number one family sport in the world, it is our priority to serve as a model for new fans and with that in mind, we are disappointed by the gesture of the athlete in question. Until our investigation is complete, there will be no further comments,” FIVB wrote in a press release that is transferred by the Brazilian media.

The Brazilian Volleyball Confederation (CBV) has also spoken. In a statement, the governing body of the country’s volleyball said it will handle the case internally, but did not say whether Lucão would receive warning or punishment for the gesture for which it is unknown to whom it was addressed. This kind of behavior of Lucão came as a surprise knowing that he is one of the most experienced players in the “Seleção”. The 33-year-old player has been a member of the national team for 10 years and won, among many other titles, the 2016 Rio Olympic Games.

ITA M: Season over for Piano after ACL injury

CL W: Khimik pull out victory in Czech Republic and get close to qualifying for group stage

BRA W: Sesc with all players at...