In a packed Polideportivo Torito Rodríguez with 5,600 fans in the stands Brazil took one more step in its undefeated streak over Argentina. This and other volleyball news read on Worldofvolley.com. 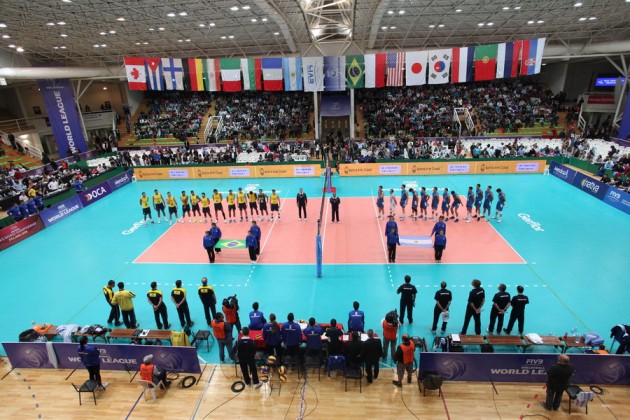 For the first time in history, Mendoza province served as a World League host, as the local crowd tried to push their guys but in the end Brazil prevailed in straight sets (20-25, 21-25 and 15-25).

Eder Carbonera, Lucarelli and Leandro Vissotto led the scores with 14, 13 and 10 caps respectively, forming a powerful offensive force for the away team. Brazil climbed up to a 3-0 record on Pool A, while Argentina is 1-2.

A long serve by Brazil on the first point showed what the beginning of the match was going to be about: Argentina ceased the opponent’s errors with Castellani’s attacking performance and jumped to an 8-6 lead. Brazil, however, quickly woke up (10-10) and relied on Lucarelli to stretch the advantage to 13-16 at the second timeout. And, in control of the actions, Brazil almost never fails. Vissotto spiked off the local block to carry Brazil on to a 15-20 score and the South American powerhouse kept the 5-points lead until the final spike by Dante, closing the set on 20-25.

An outstanding set by Bruno Rezende for a back-row spike by Lucarelli pushed Brazil to a 4-7 lead that turned out to a 5-8 score at the first TTO. The Brazilian wing-spiker also performed well in blocking and the away team comfortably went on to 6-11. Argentina kept struggling: Rodrigo Quiroga fired an ace and Federico Pereyra blocked well to narrow the gap to 10-13, but those three points remained untouched to 13-16. Eder, who finished the set with 11 points, also played an important role for Brazil in the second set, while the score evolved to a 16-20 in the final sprint. A failed local serve sealed the set (21-25).

With an almost flawless attack, Brazil made it easy in the first moments of the third set (6-8). Isac Santos, who filled the spot of the injured Lucao, served two unstoppable shots and led the way for his team to 8-12, and a while later Leandro Vissotto also scored with his serving (9-15). This time, Argentina showed signs of defeat and fell behind to 10-19, giving Brazil enough edge to be cool towards the victory. Dante and Lucarelli scored solid blocks and gave the match to Brazil by 15-25.

Strength/Stretching Supersets – Get More Out of Your Workouts