BRA M: Leandrão back to Brazil, Taubaté welcomed him

Leandrão is back to Brazil to defend colors of Funvic/Taubaté. 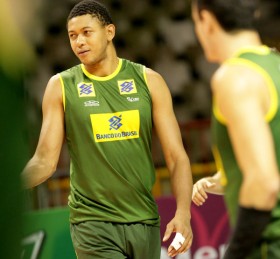 Leandrão, finished with the adventure in Iran

Now he trains in São Paulo for the obligations in the upcoming season, among them is the Paulista Championship in August.

“Our team is very well structured with lots of players who had great potential. We enter into this season humbly, but willing to fight for titles with all the big teams,“ said Leandrão.

Taubaté is under command of João Marcondes who has experience and Ricardo Navajas, with the experience of having coached the national team of Venezuela, as well as some of the top clubs in the country. The presence of the duo makes Leandrão believe into a quick success of Taubaté which will make their debuting in the elite club competition in Brazil:

“Taubaté project is very strong and expectations are high. Both coaches have always led great teams in Brazil.”

Leandrão also has high personal expectations. Missing the courts in Brazil, he promises effort to bring joy to new supporters.

“I had a very nice season in Iran, but I’m eager to play in Superliga again, to demonstrate my full potential, since outside is very difficult for all to see you play. I want to do my best, with great desire and dedication,“ says the opposite who played for Montes Claros in the season 2010/11.

Check out Leandrão’s WoV Community profile and a profile of the club Funvic/Taubaté.

4 stretching techniques for your neck

PHOTO OF THE DAY: Jaqueline started with...