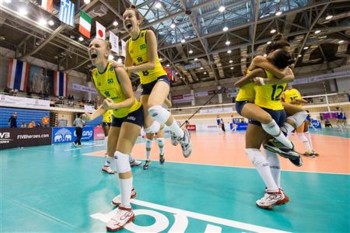 Italy came much stronger this time after finishing a dismal 11th place in the previous edition in Turkey two years ago, while powerhouses Brazil also have their sights firmly set on winning their fourth title on the same place here at which they had won their third in 2009.

As expected, both sides got off to a thrilling start to trade attacking right from the opening whistle.

The tie-breaker turned out to be a one-sided affair from the beginning when Brazil carried out explosive attacks to lead 8-1. Italy clawed their ways back to narrow the gap 4-8, but from then they became more prone with unforced spiking mistakes. Brazil stormed on the win the set 15-7, the exhausting match and a place in the quarter-finals.

To read more news from this competition click on Youth World Championship 2013.