Brazil, Bulgaria and the Dominican Republic join their hosts Puerto Rico in Pool G in the second weekend of World Grand Prix matches for 2013. 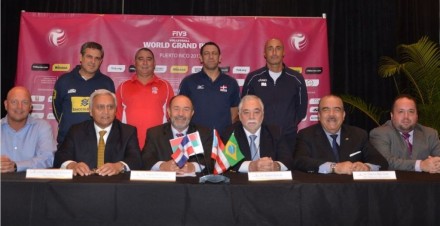 At a press conference organised prior to the start of this weekend’s volleyball action, all four coaches agreed that the level of competition is very high in this pool

Brazil continues the competition having won all three matches they played in Pool A last week. “We are very pleased to be in Puerto Rico again,” said Brazil coach José Roberto Guimarães. “We know that this pool has a great level and that we will face two great rivals, Bulgaria and the Dominican Republic, who have the opportunity to qualify for the finals. Puerto Rico as host will also give us a good game. We will ensure to give our best performance during each match.”

Bulgaria also had a good run in their debut World Grand Prix weekend finishing second in Pool D. Although they fell to China in the first match, they bounced back to defeat the Netherlands and Cuba. As Marcello Abbondanza, Bulgaria’s coach said, “This is our first time participating in the World Grand Prix and we will try to continue our great from our first weekend in Macau. We are going to play hard and continue our aspirations.”

The Dominican Republic will be looking for a straight win run in Puerto Rico. Having defeated the Czech Republic and Puerto Rico but losing to pool winners Serbia in last week’s pool B matches, they closed the weekend in second place. “We’re in a tough group,” said Marcos Kwiek coach of the Dominican Republic. “We begin on Friday against Brazil, who haven’t lost a match since last year. The objective is to gain more experience every day.”

Hosts Puerto Rico will be looking to produce some home magic this weekend, having lost all three matches they played last weekend in pool B. “Our main goal is to win some games, we ended playing very well the past weekend and we’ll try to maintain that game rhythm,” said Rafael Olazagasti, coach of Puerto Rico.

POL M: Zbigniew Bartman – “There is no time for rest”