China and Brazil will look to continue their perfect run of wins in Sapporo when they meet Japan and Serbia respectively on the penultimate day of the FIVB Volleyball World Grand Prix Finals on Saturday. 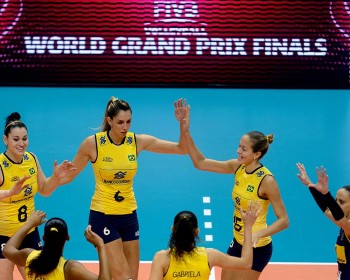 Of the six participating teams, only defending champions USA – who were hoping to win a record fourth consecutive World Grand Prix title – and world No. 4 Italy are now definitely out of the running for the title.

Brazil, who have a record eight World Grand Prix titles to their name, are on course to win their first since 2009 having secured victory in all three of their matches in the Finals so far. They are the only team that have not lost a set in Sapporo and are currently leading the rankings with nine points. China are a close second one point behind with a similar three wins from three matches. In what is expected to be the “final” Brazil and China play on Sunday.

Brazil are on a seven match winning streak in the World Grand Prix Finals, their second longest run of wins in the Finals, with their record being 10 wins in 2008/2009.

Friday was a landmark day for both these countries. China, led by coach Lang Ping, took their 12th straight World Grand Prix win after beating the USA while Brazil defeated Italy to claim their 200th World Grand Prix win, becoming the first team ever to reach this milestone. China is second with 166 wins.

In Saturday’s matches, Brazil will meet Serbia, a team they have faced only once before in the World Grand Prix in the 2012 preliminary round, when they beat the European champions 3-2. Brazil has not lost a Finals match against European opposition since a 3-1 loss against Italy in 2007.

China will face hosts and world No. 3 Japan for the 20th time in World Grand Prix play. China have won 18 of their previous 19 World Grand Prix meetings with Japan’s sole win against China being in the preliminary round of the 2001 World Grand Prix when they won 3-0, although Japan did beat China in the 2012 Olympic Games quarterfinals.

Italy and the USA will face each other for the sixth time in a World Grand Prix Finals. USA have a slight upper hand against their European rivals having won eight of their previous 15 encounters.