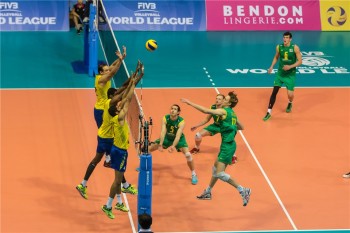 Australia has definitely lost all chances to qualify for the World League Final-Six after the loss from Brazil at home court. Thomas Edgar returned to the roster of Australia, but his 21 points were enough only for one set. On the other side Ricardo Lucarelli was leading Brazil with 18 points.

After this game it became clear that Brazil, Serbia and Italy will go to the final tournament from the Pool A.

One more country will be especially happy because of this result. It is Russia which is trying to avoid relegation from the World League Group 1. Three games before the end of the First Stage, Australia has 1-8 score and 3 points, while Russia is at 0-9 with 2 points…

The better of these two teams will remain in the top rank, while the other will drop to the World League Group 2 in the next year.

WL: Marouf showing referee to remain at his spot! (VIDEO)