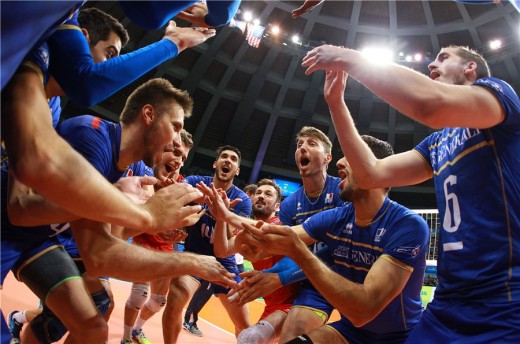 Brazilian side opened match with some amazing actions and with a very good attack and defense they simply were smashing the rival. At the result 13-7, Ngapeth managed to decrease the result with a good serves but it didn’t last too long.

Brazil answered back and returned the six point lead at the second TTO (16-10). Rezende’s side was keeping the advantage and earned three set points 24-21!

Believe it or not, France saved all ball and tied the score 24-24! Brazil again had two more set points, but Tillie’s side answered back 26-26! Then, Rouzier gave France’s first set ball 27-26, but Brazil saved it!

France answered back quickly in the second set, despite Brazil’s lead at the very beginning of the set!

The third set was decisive one! Like in the first, they played so much longer! This time, France managed to win the set! Ngapeth was the man who set a very good block and gave France 2-1 lead!

In the fourth set, host team didn’t manage to recover and France stayed unbeatable so far in the World League 2015!

Rouzier and Ngapeth were the top scorer of France! The first one scored 25, member of Modena had 21! Lucarelli scored 21 points!

Don’t forget to vote for the BEST PLAYERS OF THE WORLD LEAGUE 2015!

Congratulations to France. Despite the creative efforts of the referee, France has won. France deserves more respect.

France can play finals if they continue like this