The final match at the Rio men’s volleyball tournament will be a true classic – Brazil vs. Italy! Both sides must break a curse if they want to win the gold… 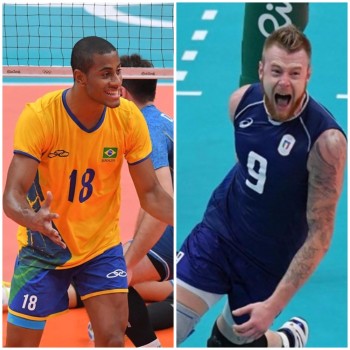 Brazil. The hosts of the Olympic Games 2016 and the reigning Olympic vice-champions. This will be their 4th consecutive finals at the Olympic Games! After winning the gold at Athens 2004, Brazil got defeated in the following two finals. They lost by 3-1 against USA at Beijing 2008; They lost by 3-2 against Russia at London 2012.

Those defeats were pretty painful for the squad of Bernardo Rezende, but the main problem for the team was that silver medals started repeating in almost every single major competition! Brazil finished 2nd in the World League 2011, then in 2013, 2014 and finally in 2016. But that is not all. They also picked up the silver medal at the World Championship 2014. Too much defeats in finals for such a great team.

Therefore, Brazil will try to break the curse of being second on Sunday evening. If they manage to do that, they will become the Olympic champions for the 3rd time in history.

Italy. One of the greatest volleyball nations in the world. However, there is just one thing that Azzurri failed to win in their rich history. The Olympic gold!

Over the past 20 years Italy were winning all major tournaments, except for the Olympic Games. They finished at the 2nd place at Atlanta 1996, they came up 3rd at Sindey 2000, then the Blue squad won another silver at Athens 2004. Four years later, Italy ended up as 4th at Beijing 2008, while they claimed the bronze at London 2012.

Can they finally win the Olympic gold? We are about to find out the answer on Sunday evening.

It is also interesting to mention that Brazil and Italy faced each other in one Olympic finals It was in Athens 2004, while Brazil prevailed by 3-1.

RIO 2016 M: Alekno on match vs. Brazil – „Referees were biased against us“