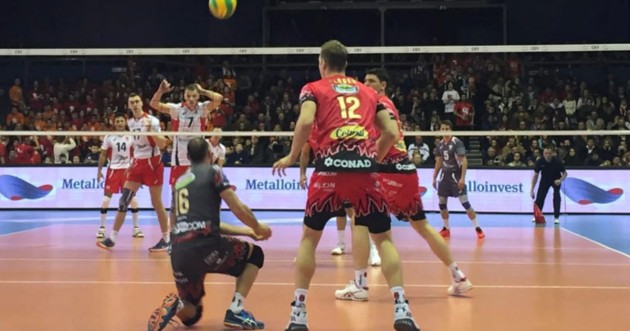 How much this Pool E win is huge for Perugia, shows the fact they played without one of the best players in the world, Ivan Zaytsev. Perugia coach Lorenzo Bernardi was forced to play the match on road in Russia without another player, a libero Federico Tosi. With this highly important triumph, Perugia kept continued perfect 4-0campaign in the Champions League, but their players will need a lot to recover for Sunday’s Serie A1 classic against Lube Civitanova. Belogorie have 2-2.

In the absence of Zaytsev, Austrian Alexander Berger took his spot in line-up and highlighted with 17 points. In Belogorie, who had 10 blocks, Sergey Tetyukhin and Dmitriy Muserskiy scored 16 points each.

Turkish side İstanbul BBSK, who invested a substantial amount of money last summer in new players, has finally reached a first win in the tournament, beating Belgian Noliko Maaseik 3-1 in Pool A and keeping Playoff 12 chances alive. French National Team trio Maréchal, Le Goff, Rouzier again did not play (like in Turkish Championship, a few days ago) which made room for some other players to stand out. American William Price had his night with 21 points. On the other side, rising star from Luxembourg Kamil Rychlicki scored 16. Now, both teams have 1-3.

Are you ready for new season of...