During the 1st leg of the 2018 CEV Men’s Challenge Cup - 16th Finals last night, the fans of the Greek club Olympiacos Piraeus did something unprecedented in volleyball. 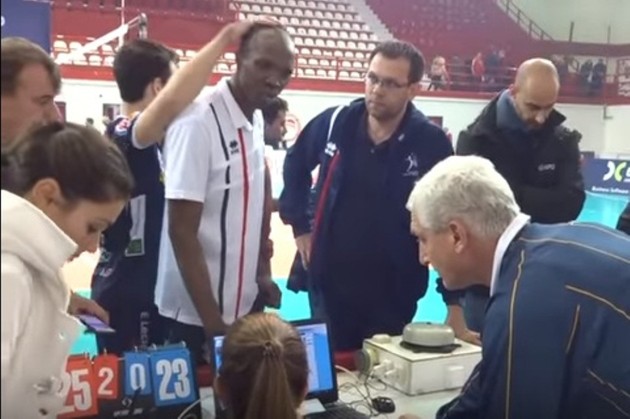 It was the first set of the match in Piraeus when Olympiacos fans shouted monkey screams each time Nathan Wounembaina from Tours VB touched the ball. So, at 24-24, the Cameroonian player could not withstand it anymore and spoke to the referee from Bulgaria, Milan Todorov, urging him to stop the match. Since the umpire did not want to make such a call, Wounembaina left the court on his own and received the red card that will sideline him from the rematch in two weeks.

Tours and the French Volleyball Federation (FFV) were appalled with this incident and while the club itself did not issue a statement regarding the case of racism, the FFV did.

„In the CEV Challenge Cup match Olympiacos vs. Tours VB, which was played last night in Greece, Tours player Nathan Wounembaina suffered racist abuse by some of the fans from the Greek club. This unacceptable situation has caused him to voluntarily leave the floor which was followed by the referee’s decision to expel him. In terms of the sports rules violation that the club suffered and the attacks on the player’s personality, the French Volleyball Federation (FFV) and the French Volleyball League (NLV) have started a procedure to appeal to the Disciplinary Committee of the European Volleyball Confederation (CEV) to punish this in accordance with its regulations,“ the FFV published and added that the French Minister of Sports Laura Flessel was informed of the incident while Eric Tanguy, the FFV President, and Alain Griguer, the LNV President, gave their support to Wounembaina.

Tours put Wounembaina photo as their profile picture on every social network account with the sign #SayNoToRacism.

VINTAGE VOLLEYBALL: Eight years ago, volleyball world has seen a move that set the bar for saves HIGH! (VIDEO)

Completely agree. I wonder what CEV will do about this matter…

It is so appalling and disgraceful both for the Fans of Olympiacos and the referee for portraying such behavior. Where is the world going to with such reactions? Where people don’t have respect for fellow humans and a legend like Wounebaina. Shame on you for this. Hope CEV takes very strict sanctions against these fans and the referee who condoned such a hideous act

the fact there is only 1 comment on this speaks volumes, if this happened to LEAH or LEON I wonder if it would still only be 1 comment. All clubs should be accountable for their FANS level a fine on the club and I am sure the problem will be fixed.

This is completely unacceptable behavior and CEV should fine Olympiacos as well as all officials in this game including delegates. And the fine should be severe to serve as the example.

Hope that CEV will take big sanctions for this club, these ‘fans’ referee and supervisor. It’s not possible to accept racism. Everybody can be proud of the reaction of the player of TVB !!! Say no to racism !!!!

Also interesting that the match is not available ‘on demand’ at Laola. What we can’t see did not happen?

Re: @The Hoff
I stand corrected. The match actually IS available. My bad…..

I was in the match. Nothing happened and everybody waw trying to figure out why this player was angry.

In Greece we do whistles and constant ooooooooooo. But is very different than the sharp and repeated oo oo oo oo of the racistic monkey-scream.

You can notice on the video that there is NOT anything different with Wounembaina and the rest Tours players, when they were trying to serve. The same whistles, the same oooooooooooo.

Nor the referees, nor Wounembaina’s co-players understood any incident.

Why you think it is sure that something like that really happened?

Where is Olympiacos opinion? Where is the video with the supposedly racistic scream?

I was in the stadium right were the supposed racist screams took place. We just booed before the service just like we always do, maybe a little bit louder since it was the end of the set. The player must have misunderstoond the sound or he is not used to play in this atmoshere. The refferies were closer to the fans than the player so they would have heard. Now the Tours just trying to avoid their players punishment and get more fans for the rematch or even get Olympiakos disqualified as they cant do this in court. Accusing someone as a racist is a great deal and i dont accept to be called one.