ECH U18 M: Russia and Czech Republic qualify for semis by scoring wins in the last round

The semifinal lineup of the 2018 CEV U18 Men’s Volleyball European Championship in the Czech Republic and Slovakia was completed with the matches of the last round. 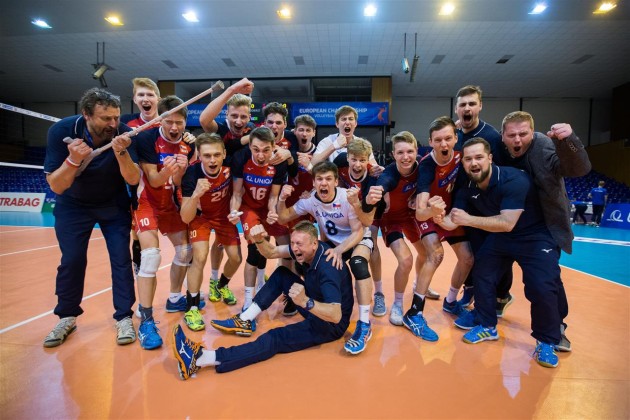 Yesterday, in the penultimate round, two teams secured their berths for the semifinals, Germany from Pool 1 and Italy from Pool 2, both as the top seeds. Today’s games of the last day meant nothing to them but were important to their rivals. More precisely to Germany’s rivals, Czech Republic.

One of the co-hosts of the tournament, the Czech Republic, beat Germany in Pool 1, in Zlín, by a 3-1 (25-16, 25-22, 23-25, 25-22) to advance to the semifinals, which will be held in the same city, as the second-seed. Dukla Liberec youth team outside hitter Matouš Drahoňovský topped the Czech’s with 19 points. Simon Pfretzschner, who competes for ASV Dachau (the German Division 3) scored 15 points for Germany while Maximilian Kersting from WWK VCO Kempfenhausen (also competes in the country’s Division 3) added 4 kill blocks. Bulgaria was most affected by this outcome because they would play semifinals in case Germany beat the Czech Republic.

In a direct duel for No.2 in Pool 2, Russia outplayed Belgium in Púchov (Slovakia) in straight sets, partially 25-13, 25-22, 25-22. Outside hitter of Dagestan Makhachkala (Division 2) youth team, Omar Kurbanov, was the best scorer in „Zbornaya“ with 18 points. He recorded 79% reception (14 digs, 21% excellent). Joost Peeters scored 10 points for Belgium.

SRB M: Novi Pazar spoil title celebration of Vojvodina by running them over in Game 3 of finals

Dahlqvist for WoV – “If we can win, that would be upset for Linköpings knowing the team they have this season”